Due to Covid-19, all of our programming is currently virtual. Our building is closed to the public but AIFC is still here for you!

WE NEED YOU: We’ve Rallied Now What? 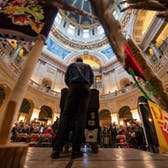 WE NEED YOU: We’ve Rallied. Now What?

The rally began with Native Americans gathering around the “Midnight Express” drumming band, seated on the steps outside the Capitol, singing powwow songs. The main drummer was Crow Bellecourt, one of Clyde’s sons.

“We operate in buildings run down, dilapidated, and deteriorate quite rapidly,” Hobot told the House Capital Investment Committee. For example, his American Indian OIC (AIOIC) is in a warehouse built in the 1930s where telephone directories were once stored.

Mary LaGarde, executive director of the Minneapolis American Indian Center on Franklin Ave., which is also included in the funding request, said at a press conference before the rally that the center is putting buckets inside the building because of a leaky roof. “If you’ve ever been in our building when it’s raining, bring an umbrella,” she said.

At the American Indian Family Center in St. Paul, another facility seeking funding, ceiling tiles are falling, and there is a hole in the floor, said Sharyl Whitehawk, a counselor at the Khunsi Onikan Outpatient Treatment Program for American Indian Women.

Funding for the 12 projects could be included in an infrastructure package that heads of state hope to deliver this session.

While the money would pay for Twin Cities projects, the funding would also help out-of-town tribal members, such as those who take job training under his program and then return to their home areas, a Hobot said.

Proponents of the projects note that their push comes when unemployment among Native Americans remains high, with a disproportionate number of homeless people and the highest COVID-19 death rate among ethnic groups.

Rather than squabbling over funds, Hobot said the 16 Indigenous organizations united around a single proposal to fund 12 projects:

At the committee hearing on Tuesday, R-Grove City Rep. Dean Urdahl said, “there are a lot of good projects here,” but demand totaled “a good chunk of change.” He asked Hobot what the groups’ priorities were if not everything could be funded.

Hobot listed five priorities: the American Indian Center in Minneapolis, the Indigenous Peoples Task Force, the Ain Dah Yung Center, the Wakan Tipi Center, and the MIGIZI facility. He said if the Legislature approves the funding, construction could begin this summer.

The capital investment plan proposed by DFL Governor Tim Walz includes the bulk of the funding for these five projects as part of his “bond equity” initiative. The governor intends to use cash from the general fund rather than borrow to cover costs.

But whether Walz’s plan and advocates’ hopes will bear fruit will likely remain uncertain until May’s final days of legislative session negotiations.

Hobart said many organizations have raised private funds or secured federal funding to cover some project costs and $60 million. If the Legislative Assembly funded the five priorities for about $15 million, the additional funds would be allocated pro-rata basis for the other projects.

What can you do to assist AIFC and the 16 non-profits that make up the UILI reach its goals?

How can you support our work?

It’s a meaningful time for us all, and we appreciate your help,